Can you believe we’ve done it? Nine and a half weeks of training are behind us, and now we look forward to the next part of our journey. By tonight’s end, we will be the next set of volunteers. We’re about to join a league of extraordinary individuals devoted to changing the world. Doesn’t that make you feel great!?

We need to applaud ourselves, not just for what we’re about to do, but what we’ve already done. Ten weeks ago, we were strangers, meeting for the first time in Miami, and today, we are family. Together, we’ve endured waves of homesickness, relying on each other for support. We tried new foods, learned a new language, and adapted ourselves to a new culture and a new way of life. We were taken out of our comfort zone and placed in homes with people we barely new, but when we left, our families grew a little larger.

That is the essence of Peace Corps. We are in the business of spreading world peace through friendship. To most people, those are pretty words meant to inspire, but to us, that is our motto. It’s our way of life.

Each of us has our own reason for joining. Some of us crave adventure; others are driven by a desire to change the world. Maybe we’re not ready to settle down, or perhaps we’ve been settled for too long. We might be looking for inspiration, or we could be fulfilling a lifelong dream. Whatever the case, it’s important that you remember your motivation, and keep it close to your heart. During the next two years, we will be tested at every turn. We’ll wonder why we gave up our comforts, like air conditioning, or hot showers. We’ll miss important family events. Our favorite foods will be hard to come by, and we’ll miss the friends we left at home. We will continue to adapt to rules and regulations for safety and we’ll live our lives on a shoestring budget.

But these are the reasons Peace Corps is so prestigious. This is what makes us leaders. Out in the world, we learn how to make something from practically nothing. We discover a new way of relating to people. We develop an appreciation for what we have back home. But most importantly, we begin a lifetime of service.

This will not end after two years. The time we spend with Peace Corps will change us forever. We will speak at colleges and universities to recruit future volunteers. Some of us will get involved with service projects. Others will discover a love for communities, travelling, and doing “good.” Regardless, all of us will grow immensely.

As educators in Jamaica, our goal is to spread knowledge. But any real teacher knows that a person never stops learning. We will share with the locals as much as we will take away from them. This is a partnership between two cultures, and oftentimes, the littlest things we experience will be the biggest lessons.

The Peace Corps has been with Jamaica since 1962. We are the eighty-fourth group to lend our skills. Together, with those before us laying the foundation, with our Jamaican counterparts, and with the help of each other, we are reminded of another motto; out of many, one people. There is nothing more valuable than partnership. The human race is a social one, and what we are doing here is a beautiful thing. This time is ours. It’s our moment to shine. Let’s leave here today and do everything in our power to make the most of it.

Ladies and Gentlemen, my fellow volunteers, welcome to the Peace Corps.

Five weeks ago, I was so culture shocked that I wanted to go home. I didn’t care about my commitment; in fact, I hadn’t really made it yet. I was apprehensive about walking away from the Peace Corps, but I rationed that my happiness was more important, and at that moment, I was far from satisfied. I wanted my personal freedoms back, and I yearned for familiarity.

But I couldn’t shake the feeling that I would regret it if I left. After all, my decision to join was not one I made lightly, and I’d been alerted to the ups and downs that trainees and volunteers face throughout their service. That little voice inside my head, the one that dictates to my steadfast personality, told me to tough it out.

And today, I am so glad I did!

On Friday, during our Swearing In Ceremony, I sat with the members of my group while we waited to take our oaths. As we listened to our program directors speak, delivering words of wisdom and encouragement, I thought back to that week of doubt. It was then when I finally felt the pride and satisfaction I’d been looking for. And I knew, with every fiber of my being, this was only the beginning.

What would have happened if I’d left? I wouldn’t have realized how much of the language and culture I’d picked up. I kicked ass during the Language Olympics and amazed myself at the amount of material I’d retained. And if that wasn’t enough, I was due to give a speech within the hour.

I don’t even want to consider what I’d be doing if I were at home.

I smiled to myself, wishing that those who’d doubted me throughout my life could see me now. From a troublesome child with low self-esteem, to a Peace Corps Volunteer, elected to give a speech at the Ceremony, I was on top of the world. In the presence of PCJ staff, our supervisors, members of Jamaican congress, workers from the U.S. Embassy, and the media, I finally understood the gravity of the choice I’d made. I’d joined the Peace Corps, and I would never be the same again.

The ceremony lasted about two hours, and at its conclusion, twenty-eight trainees became twenty-eight volunteers. It felt a little like graduation. We’d spent ten weeks in training, and then we walked down a line of dignitaries, shaking their hands, and finally collecting a certificate of completion and taking a photo.

But I’ve glossed over some of the coolest parts, so let me fill you in. Our day started at 8:30 at the Ambassador’s residence. We were invited into her home, given a tour of her vast art collection, and then ushered into her veranda for a delicious, and elegant, breakfast. Unfortunately, she was called away and was not present, so we were greeted by the Chargé D’ Affaires, who fills in for her during her absence. We dined on bammi, rich Blue Mountain Coffee, egg and callaloo, pineapple tarts, cranberry muffins and tomato and mozzarella pastries.

Afterward, we took a couple of professional photographs, and then continued on to her backyard for our ceremony. After we were sworn in, we mingled in the backyard and was served finger sandwiches and cake. In the background, a selection of music was played softly. Here is my favorite part, because of all music, in the entire world, that they could have selected, they played a loop of Elton John songs. Thus proving the Elton John defines my life. =)

Now if only I can get him to play at my wedding….

By midafternoon, it was time for the volunteers to depart to our sites with our supervisors. My ride back to Cedar Valley was about two hours. As I drove up the mountain, I passed the school where I work. The students had only been dismissed a half hour earlier, so they were still hanging around the school, along with other members of staff. As I drove past, they saw me, called out my name, and jumped up and down with excitement. 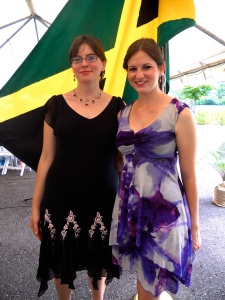