I’ve got this friend – he’s furry, and has whiskers and a tail. His name is Bowser, and without him, I’d probably go insane.

The last time I wrote about Bowser, he was a kitten of ten weeks. He was too skittish to let me hold him, wasn’t quite litter trained, and was only starting to adjust to his life as a domestic house cat. In honor of his first birthday, I’ve decided to provide a feline update. So much has changed!

Bowser’s my little buddy. He follows me from room to room throughout the house, and loves talking to me. Anyone who’s been on the phone can testify that he’s quite the chatterbox! He’ll announce his presence, or demand my attention with a persistent and boisterous meow. As a kitten, he didn’t like to be held or pet, but now he can’t seem to get enough. A well-placed scratch behind the ear, or under his chin, will make him weak in the knees, and he’ll brush up against my legs if he wants to be held. In the afternoons, he can usually be found napping on his favorite pillow, or in my lap. 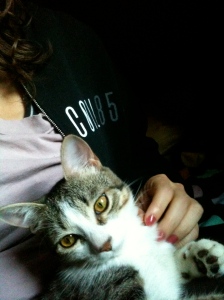 We’ve also learned how to communicate; or rather, I’ve finally learned to understand him. The litter box is a hot topic, and at least once a day, he sits by his box and meows until I scoop his poops and give him some fresh sand. In the mornings when he wants more food, he’ll jump on my bed, walk over to my head, and meow loudly in my ear. If that doesn’t work, he’ll bring his toys on the bed, and when all else fails, he’ll resort to attacking my hands and arms until I get up.

Speaking of toys, this little monster will play with anything! Although his favorites are his mousie and his catnip dolphin, he’ll always be able to find something on my desk or my dresser to bat around and then run off with. He’s also prone to locating random objects around the house and carrying them in. I’ve caught him with scraps of fabric, a small, stuffed teddy bear that he stole from my host-mom’s shelf, and a plastic fork that he played with for weeks. But he has a tendency to hide his toys, and then forgets where he put them. After several months without his jingle ball, he found it behind the wardrobe, and promptly misplaced it a day later.

Bowser’s a great hunter too. In the evenings, he spends his time in the kitchen stalking moths or hunting lizards. At night, while I sleep, he protects me from cockroaches and spiders. All too frequently do I visit the bathroom to find my rug crumpled and a dead roach hidden within the folds. Sometimes, I don’t even find the roach – all I see are its little legs and antenna bits. Last week, Bowser took out a duppy bat!

A duppy bat is a large, black moth. Jamaican superstition states that duppy bats protect the house from spirits (duppies)

When I last wrote about Bowser, I also said I wasn’t sure if I’d be bringing him home after my service. I wanted to give him a chance to adjust to his new life as a pet, and then make a decision. Shortly afterward, the bond between us solidified, and the idea of leaving him in Jamaica became unimaginable. Now, there is no question. This cat is my best friend. He keeps me on my toes and is an endless source of entertainment. When feelings of isolation set in, Bowser is always there to pick me up. And he’s so full of spunk and personality, that I often forget he’s a feline!

Some of my goals for Year Two include making various phone calls to veterinarian offices and airlines to determine what needs to be done in order to bring him home. He’s already been neutered, and is in good health. He likes to stay inside, so he’s free of fleas and ticks. I give him heartworm medication once a month, and I already have an “airline appropriate” carrying cage. I suppose the next big obstacle (and perhaps the next time I write about him) will be when he returns to Miami with me, and I introduce him to my other beloved baby: Emma. 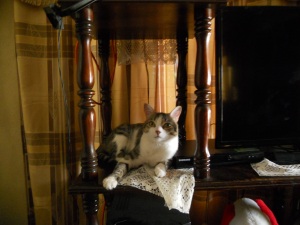 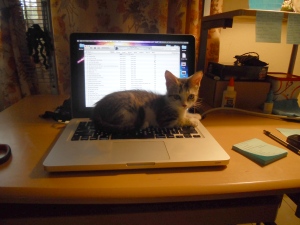 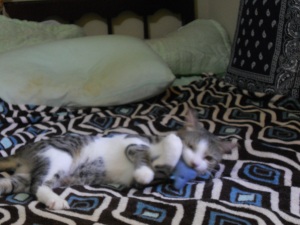 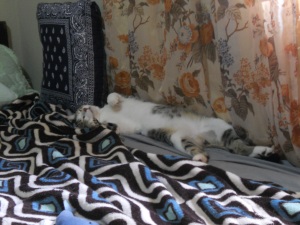 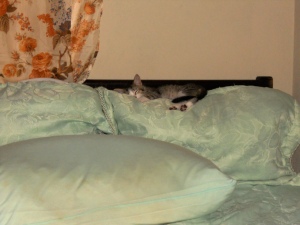 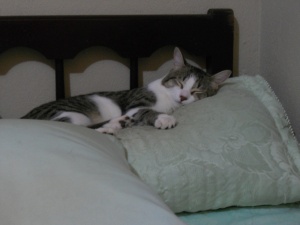 One thought on “My Little Monster”