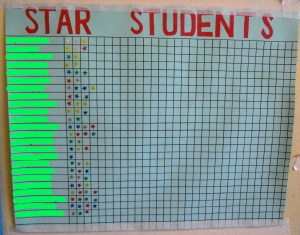 In my classroom, I keep an incentive chart on the wall and give stars for good behavior. The students really respond to it. It gives them a chance to visibly track their progress and see how close they are to earning a reward. Bad behavior, they understand, means they don’t get a star that day, and if their behavior is really appalling, that I might even take one away.

The idea was modeled after a similar system that I remember using as a child, and it was something I set up and implemented on Day One of last year. For my Jamaican students, this Americanized system of rewards and consequences was new to them, but it didn’t take long for them to catch on. Within days of school starting, my students would come pouring into my classroom every chance they got to count their stars.

A success, I carried over my incentive chart for Year Two of my service, but with a few small modifications. Last year, when the students reached ten stars on their chart, they got a reward, and at fifteen, another reward, this time a little bigger. I continued upward in increments of five – the ultimate prize being fifteen minutes of computer games. But this year, I scrapped the idea of automatic rewards, and instead, opened what I’m calling my Star Store.

This is shaping up to be both a brilliant idea, and a mad one.

The Star Store is open on Fridays during lunch, and its merchandise includes things like a candy (in Jamaica, they call them sweeties), stickers, cool pencils and erasers. I’ve also got some silly bandz, an option to eat lunch and color with me one day, and of course, the ever coveted, fifteen minutes of computer games.

I started each student off with thirty stars and encouraged them to spend wisely. I also explained that computer games, while on the list of purchasable items, would not go on sale until December 1st. “If you know you want to spend your stars on computer time, then save them. That way when December 1st comes around, you already have enough and you can buy it!”

I had three primary objectives when opening the Star Store. The first was that I wanted to help teach children how to spend or save their “money.” Some students, I knew, wouldn’t be able to save their stars, while others would demonstrate patience, and earn themselves a bigger prize for it. I also thought it would be nice for the students to be able to pick and choose what kind of rewards they wanted for their good behavior. I reasoned that if I gave them more control, it would ultimately lead to more responsibility.

So far, so good! The store has been open for four consecutive Fridays, and I’m very pleased with the results. As predicted, some students spent their stars immediately, and came back the next week unable to understand why didn’t have any left. Others have spent a little bit here and little bit there, and decided to save the rest. Some students I haven’t seen at all! One inquisitive fifth grader asked, if he saves his stars and gets sixty, can he buy 30 minutes of computer games? I told him of course!

But the downside to my Star Store is that my Friday lunches are not my own. My classroom has easily become the most popular destination for the school to congregate. Noise level aside, this is particularly difficult to deal with, because the students that aren’t in my pull-out groups want to buy things too, and are willing to pay with money. Naturally, I refuse, and have to send them on their way in an effort to keep things at a manageable level.

My students are having challenges of their own too. They first need to master the impossible task of forming a straight line, and understanding that I can only help one customer at a time. They also need to work on leaving my classroom after they’ve made their purchase. These procedures will take a couple more Fridays to master, but they’ll get it. In the meantime, helping some of my students to understand the way “money” works will take a little more effort.

The last challenge I’m facing with my Star Store is the way stars are being tracked. Operationally speaking, I add stars to the chart for good behavior, but I’m not removing any after they’ve been spent. This causes great confusion when students come to count their stars. And while its easy enough to do some quick math for someone standing in front of me, it’s going to be much more difficult if I’m doing that for everyone while the store is open. I’m currently brainstorming some alternative methods for balancing their star-accounts.

Overall, I love this idea! I’m excited to see my students excited, and it’s going to be a lot of fun to see how this plays out the rest of the year. I’ve inspired some of the teachers too, and they’re now doing star charts in their classrooms. Positive reinforcement works, and if a teacher can weave in a lifelong lesson in the process, that’s even better. Opening a store and giving them stars for money will provide a foundational comprehension of how the monetary system works, and will drive home the idea that hard work pays off.

So for now, I can toss my personal sanity on Fridays aside, and become a teacher who doubles as a landlord, a storeowner, a bank manager, and an employer. I feel a little bit like this guy: