I could hear the horns halfway through Jacardi (means, shortcut). Children clad in black, green and gold laughed and shouted at each other as they barreled past me down the mountainside. Inwardly, I awarded myself for remembering to buy a Jamaica shirt for the occasion.

The day was rich with excitement. All over the island, children were celebrating their country’s heritage and accomplishments. The school served chicken foot soup and barbequed chicken back and neck. A bulletin board displayed newspaper articles of Jamaican athletes at the Olympics. The compound was a rolling wave of Jamaican colors, playing to a soundtrack of young voices, shouting playfully in a language I still don’t fully understand. 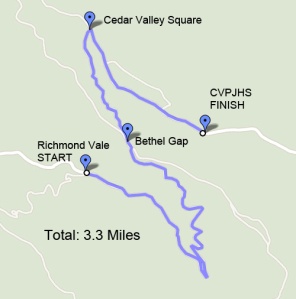 We stood under a tree on the side of the road, holding light blue tickets made from poster board and a stamp of the school’s seal. “This is the last checkpoint,” Miss explained to me.

The marathon was the highlight of Jamaica Day. Fifty students signed up for it. Shortly after Devotions, they were loaded into two buses and brought to their starting point in Richmond Vale, while several teachers dispersed themselves along the way. The objective: run from Richmond Vale back to Cedar Valley Primary School – a total distance of 3.3 miles.

For a long distance runner, three miles may seem like child’s play, but consider that a U.S. student might be asked to run a mile in his/her P.E. class, then factor in pavement instead of grass, a couple of steep inclines, and children without shoes. That’s the CVPJHS Marathon.

We waited for close to an hour before students made their way toward us. They came charging down the road – barefoot* and shirtless – collecting their colored tickets along the way, encouraged by cheering community members.

They were given ice cream and orange juice upon returning to the school.

* When parents buy shoes for their children, sometimes they have to buy one pair to last two or even three years, so many students prefer to ditch their shoes (especially when running) as soon as they get to school.

“Wait, who is this?”
“Carrie Russell. She brought home two gold medals for Track and Field.”
“And she’s from here?”
“She was a student of mine!”

I thought of the students who just ran the marathon; one of them could be Jamaica’s next biggest athlete. What pride these students must feel, to know that one of their own made it to the top. I wonder if that crossed any of their minds as they ran barefoot on mashed up roads through their poor community.

For me, this was exciting. Here I was, a stranger in a strange land, meeting a local star. More importantly, as an Educational Peace Corps Volunteer, whose primary goal is to “make a difference,” there stood before me living proof that you can do anything you set your mind to. Was this as inspiring to the students as it was to me?

This was not the first time I was meeting an Olympic athlete, but this was the first time I witnessed one return to her roots. She arrived on campus so casually that at first no one paid her any mind. Wearing blue jeans, sneakers, and a blouse, she blended into the crowd and disappeared from my view.

A little later she spoke to us, encouraging students to follow their dreams and never give up. She did not speak of her fame, but of how good it felt to return to where it all began. She thanked her teachers – many of whom are still at the school – and assured us that CVPJHS will always have a special place in her heart.

Penlyne Castle Primary School joined us in the afternoon for the long-awaited, highly coveted football match. With their school in red, and our school in blue, the students began warming up, and more community members arrived. It would appear that the football match was more exciting than an Olympic athlete!

I didn’t stick around for the football game; it was after 3pm by that time, but I hear CVPJHS kicked some major Penlyne booty.

So, between running and football, I’m sure there are a couple of stars hidden within our midst. And as far as Jamaica Day goes, I’d like to think a few of students were inspired to try their best and never give up.

For me, they day was stimulating. Even though I sometimes still struggle to understand the language and culture, and I’m often not made aware of big events until the last minute, I felt fully included for the first time since joining the CVPJHS family. Maybe it was the Jamaica shirt. Or maybe I’ve finally been here long enough to have not slipped everyone’s minds. But while I munched on chicken neck, hung out with the students, and witnessed a real-life story of beating the odds, my preconceived notions of a Peace Corps Volunteer came to mind.

Prior to my own experience, I believed the friendly people I saw in pictures with foreign children were important people. I believed they sat on mountains of personal achievements and were now influential ambassadors performing miracles. Surely these volunteers had to have hearts of pure gold – a heart of which I was not worthy.

So I applied on a whim, never believing I’d get in. Then I did, and slowly made the transition from the outside to the inside. Eleven months into this crazy exploit, and I’ve finally come to understand that I am now one of those people from the photos. Only, I am not performing miracles; I’m taking baby steps. I’m not sitting on a mountain of personal achievement, because I am still learning and growing. Anything I’ve done feels small in comparison to what I’d like to do. And I don’t have a heart of pure gold; I just have my heart – a heart that’s made mistakes but still tries to make the right choices. I’m no great, influential ambassador; I’m just me.

Just me, sitting on a bench, surrounded by students, on a little island in the Caribbean, eating chicken. I am completely present. Around me, I see a culture that is different and also the same in so many ways.  All at once, I understand that this is what it feels like to be one of those people in the photos.

Oh look! I’ve got one now too. 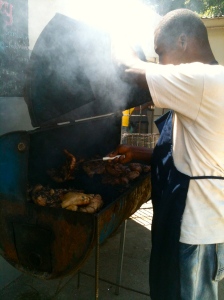 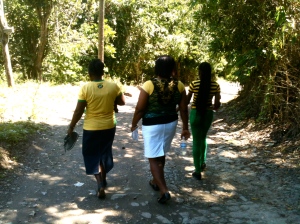